When I was a little girl, my father brought me to the airport on a daily basis. I can’t recall a time that I wasn’t at the airport (other than ballet lessons.)  Before I was 12 or 13 I didn’t mind it much, in fact, I really enjoyed being at the airport.  But after I hit the teenage years, my interest faded because all my friends were going to the beach while I was performing annuals and 100 hours at the airport.  I never thought that I would choose aviation as my career path, so I didn’t seem too interested like I did as a child.  It was enjoyable to go flying and I was very good at wrenching but something was missing.  Was I burnt out?  Could a child get burned out on airplanes? 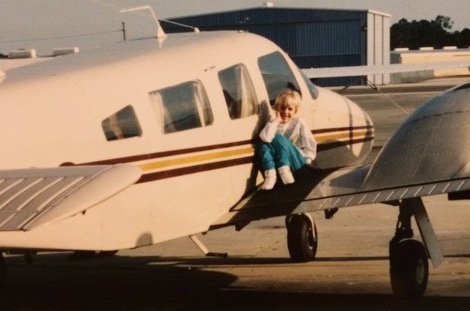 Let’s fast forward years later.  I was using my entrepreneurial spirit to make money in aviation at a young age.  I was selling airplane parts on the internet to pay for my truck/dirt bike fetish and saving money for college.  I then would hire a friend to help wash and wax airplanes at the airport.  [I’m not going to say the bikini’s didn’t have anything to do with our success!]  But, I was so familiar with airplanes and aviation that it was hard to stay away from it.  There was a point in my life that I moved to North Carolina and suddenly realized the impact that aviation had on my life.  I lasted 6 months and ran back to Florida.

Now that I have an aviation business of my own, I never thought that my childhood of blood, sweat, and 5606 would come in handy.  I never realized the impact that my father, grandfather, and the friends at the airport had on my life.  My father always pushed me to be the best I could possibly be (and still does it to this day.)  As an adult, I see how important it is to have the young spirits of aviation around.  Yes, this younger generation is different.  Yes, they can come off as annoying or under foot because of their lack of experience.  You can’t expect them to know everything coming into the gate.  This youth is going to be the SOLE reason why aviation will stay alive for our grandchildren and great-grandchildren.

My point is, you don’t have to be born into aviation like I was. In fact,

as an aviator, it is our DUTY to nurture those who show interest.

Feed their interest and drag them to the airport.  Tell them it’s not as scary as it looks. Tell them it’s okay to get dirty.  They will achieve a sense of accomplishment.  This accomplishment is the same psychological feeling (the release of dopamine) they get when they find that Pokemon or win that next level on their video game.  The best part about all this?  They will be outside and involved in something bigger than they could ever imagine.  This is why I can’t tell a kid he can’t come hang out at Fast Aviation.  This is why my father dragged me to the airport instead of allowing me to go to the beach during spring break (which I can promise you I would be up to no good.)  I always wondered why the Cessna 182’s annual fell on this week.  This is why you should bring your friend’s kid out flying.  Grab your nephew or niece.  Show up to one of those early pancake breakfast’s that fly kids around on a Saturday.  You will be glad you did because there won’t be a need for all these mechanics, fbo’s, or airports if we don’t have people who want to fly airplanes.