Why the aviation industry is in a downward spiral.

What am I going to do with all these aircraft parts lying around?

Where do you sell airplane parts?

Where do you buy airplane parts?

What is this worth?

These are the commonly asked question I get as an aircraft salvage business owner. In fact, it is the first words out of someone’s mouth almost 75% of the time! (Other than ‘Do you have a sister?’) In all actuality, these are very important questions to be asking in today’s aviation industry. Aircraft owners and mechanics need access to affordable parts because prices from the manufacturer are through the roof!

Go ahead, Google it.

My question to you is: How is aviation going to survive if parts are astronomically through the roof? I’ll tell you what, if Cessna was my only source, you can bet your bottom dollar I would be rocking out at 2500’ without a glove box door!

There are multiple ways to sell airplane parts on the internet or via paper ads but what I have learned over the past 10 years is the industry needs something different. It needs to be streamlined and simple. It needs something that caters to JUST aircraft parts and understands the industry standard. Here are some things that we DON’T need:

If you agree with the above mentioned points, then it’s about time you looked at new avenues to sell or buy your parts.  I get it, you’re use to using the same systems that have been in place for the past decade. But as you and I both know, times change and we must move with them if we want to survive. I encourage you to join Hangar Swap today and at least TRY it out. What do you have to lose? It’s so simple, the most amount of time you’ll lose is minimal compared to the amount of time you haven’t spent searching or selling parts!

My last point, Hangar Swap ended last year with 4 million hits. This year, we ended February with 2 million hits! The numbers keep rising and it’s about time you jumped on the bandwagon. So fasten your harness and push in that mixture, we’re going flying! 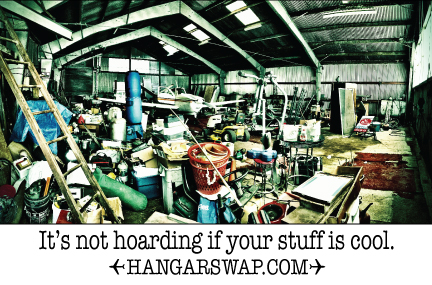